AUTHENTICITY:
The quality or condition of being authentic, trustworthy, or genuine- states Google, and Free Dictionary.
Undisputed origin, genuine, original.  Relating to or denoting an emotionally appropriate, significant, purposive, and responsible mode of human life- states Dashboard Dictionary on Mac.

So, how do I stay authentic to myself and the world in a day in age where corruption, lies, betrayal, transience, super sonic pace, laziness, immorality, the 'masses', propaganda, negative greed, ignorance, ill manners, and the lot run naturally rampant, even promoted?
One of the first memories I have of preschool in Tokyo were of a group of girls that kept close and did the usual 'girly' things, keeping the boys and other unfortunate souls who didn't fit in far from their circle; I was not too fond of those girls, as they would often be quite irrational and unpredictable.  I was far happier hanging with the boys playing tag, going down in history being the first girl who need to be rushed to the ER (I think a few of the nuns fainted) as I did a face plant into the solid piano, splitting my brow bone.  I touched it to see if it was bleeding and it wasn't, I thought I could continue playing, the teacher looked at it and went an ashy blue color.  I knew play time was over. 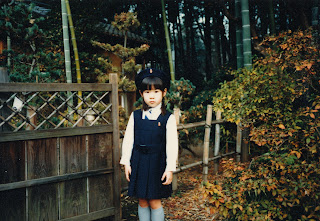 In my uniform from kindergarten. 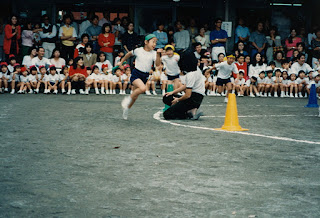 I was the school relay star, until I left.
I've many stories similar to this that have accumulated and don't think will ever end.  But the point is, I have always stood apart from these so called groups; never fitting in, always thinking, and wondering, I was an 'in-between', and in a way, I guess I got along with everyone... but did I feel that back then?  Nope, I felt alien.  And for much of my life I was an alien (in an immigration/customs official, international way), unable to speak the language, learning new cultural traditions and mind sets, good byes and new hellos, always in transit.  I had no opportunity to plant roots in a destination, community, friends, and even family; for a while I was searching frantically, it lead me to the darkest areas of life where hopelessness and death ruled, and I no longer existed. 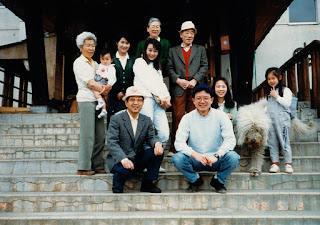 I always got along well with dogs; they got me and I got them, simple.
The toughest was -first the decision/choice to climb, -next the process of climbing (especially at the beginning, for the longest time, there was no light up ahead anywhere, the tunnel/hole was that deep), -then not giving up and persevering, -gaining as much knowledge along the way, so not to slide back down.  But sometimes it was inevitable, so I -learned and kept trying.  I looked like hell, I felt like shit, I didn't think I knew what I was doing or where the heck I was going, I was scared, anxious, and everything amplified to the max!
But, I learned a whole lot about myself; who I am, what defines me, my universal truths, values, morals, mannerisms, cultural heritage, the inner workings of my psychological, emotional, spiritual, and physical self, wants, needs, where who I am originates, why, when, how, who, works or doesn't work, a small red flag or a big neon red flag, to the tips of my fingers and every cell in between I have researched, experimented, experienced, sensed, felt, known, defined, and affirmed.  Every moment is new, unknown, and something to be discovered!  That excites me, and makes life worth living; enthusiastic, exuberant, intense, honest, and authentic.  Why be anything or anyone but your naked, whole, truthful self.  (And don't be lookin' at me like you'd rather be like so and so and look like so and so; I've been there, thought/felt that, but truthfully, being unique is a treasure that no one can take away from you, so embrace and enjoy)! 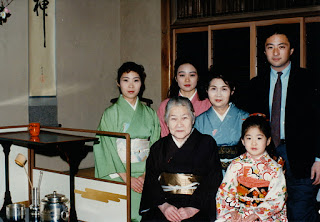 The traditionally Japanese side; that is my great grand mother, the grand master of tea ceremony and flower arrangement.
I am going to be doing a series of these posts writing about BEING Marie T; my life experiences, lesson's learned, options and possibilities of regaining healthy life and well being, trials and tribulations in society, being an artist, the truths in the art world (which I will probably get a lot of flack for), and for anyone else in any profession, sect, corporation, community, and walks of life (as they are all inter-related).
In the next blog post I may talk about how this idea came about; this is more my style.  Personal, honest, frank, sharing, expressing, and being authentically me.  So I hope you enjoy and will journey on with me:)
What traits make you authentically you?  Do you embrace those special aspects or are you still trying to accept them?  What does authenticity mean to you?
Hugs and Smiles,
Marie
Posted by BeingMarieT at 2:50 PM