Excellent Article about my experience in INSIDE TORONTO

Last week I was interviewed by Justin who wrote this wonderful article for INSIDE TORONTO in regards to the stamp competition.  Seeing my story printed I find it quite moving as I read from a different perspective.

Posted by BeingMarieT at 1:46 PM No comments:

My recent Youtube video about the mental health awareness stamp competition, watch if you are curious:)

Stamp cause in the Daily Planet health section

Posted by BeingMarieT at 5:59 PM No comments: 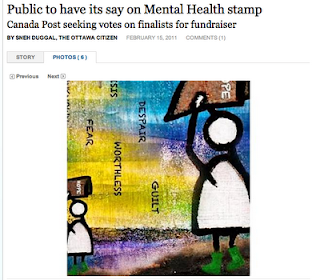 OTTAWA -- For the first time, Canadians are being asked to use their judgment and artistic flair to vote on a design for a new postage stamp, all in an effort to raise awareness and funds for mental illness.
For the next month, Canadians will be able to vote for their favourite design from a group of five stamps that have been chosen as finalists. The winner will become the 2011 Mental Health stamp.
“It’s a great opportunity to have people look at them and have people learn about the issue,” Canada Post spokeswoman Cindy Daoust said.
Canada Post decided to focus on mental illness starting in 2008 and created the Canada Post Foundation for Mental Health. Each year a mental health stamp has been created, and the sale of those stamps from 2008 to 2010 raised nearly $1 million for the foundation.
One dollar from each of the booklets of stamps sold went toward the foundation.
More than 300 submissions Canadians sent in more than 300 submissions between the launch of the competition in November and Jan. 10. The individual whose design was the most popular online won an iPad and a spot as one of the 20 semifinalists.
During the first phase of the competition, the site received a half-million hits as people looked at the designs and voted.
A panel of judges then selected another 19 submissions.
The Stamp Advisory Committee, a national group that usually chooses stamps, selected the top five designs. The designers were from Toronto, London and Courtice, Ont. and Terrebonne, Que.
“The designs are quite stunning,” Daoust said.
“They each tell a story about mental illness. They tell the stories of how important it is to speak about this, and anytime we’re talking about it, we’re helping to reduce the stigma.”
Daoust said the foundation was created with the aim of raising money for community groups helping people with mental illness and reducing the stigma.
“While funding is very important … we also know stigma is the No. 1 reason people don’t ask for that help,” she said, adding the fact that the mental health stamp would be viewed by many would help in that effort.
Canadians have until midnight March 14 to vote for their favourite designs. They can cast one vote per day for each design.
To view the five designs and vote, visit the website deliverhope.ca. The winner will be announced in April.
© Copyright (c) The Ottawa Citizen

Read more: http://www.ottawacitizen.com/health/Public+have+Mental+Health+stamp/4282909/story.html#Comments#ixzz1E9jIZ7pt
Posted by BeingMarieT at 3:31 PM No comments:

I have just received wonderful news that I have been chosen as one of the top five finalists in the Canada Post Mental Health Awareness Stamp Competition!!! 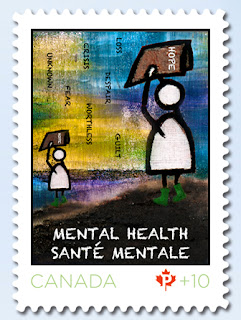 I need public votes to win the actual Stamp Design they will be printing, so PLEASE PLEASE PLEASE from the bottom of my heart vote five stars for my stamp design and share it with everyone you know in person, facebook, twitter, other social network sites, publications, Youtube, everywhere PLEASE.


I am very dedicated to spreading mental health awareness through my art work/career/life, and helping others affected by mental illness and mental health issues in any way I can.  Your support will mean the world to me and so close to my heart. 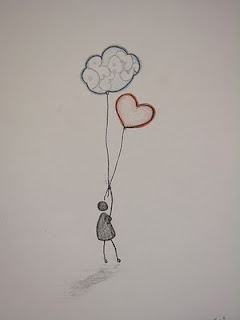 Throughout history there have been many artists afflicted with mental illnesses, and I am another one of them; I suffered all my life with chronic depression, major anxiety disorders, as well as my devastating experience with severe anorexia and bulimia which I have worked my ass off to recover completely from (which is exceptionally rare). 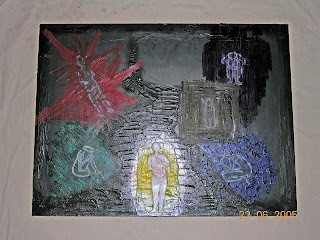 I have experienced the countless Emergency Room visits, the Intensive Psychiatric Assessment Units, Psychiatric Emergency Rooms, the psychiatric hospital stays, inpatient and outpatient programs, treatment facilities, groups, the professionals, the other patients some of whom I've made great connections, the mountain of medications, and the ICU for those times my suicide attempts were fatal. 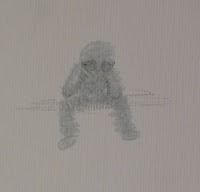 I do not want to talk about the darkness whilst in the struggles and depths of my mental illnesses as I believe we've all experienced in some form what these times feel like, and 'know'.  But I do want to and need to talk of and spread the word of all the efforts I have taken to prepare, dig, crawl, and climb (through the mud) my way out of and to where I am today; alive, proud of who I am as an individual, hopeful, believing, grateful, and totally embracing and fascinated by everyone and thing in the world. 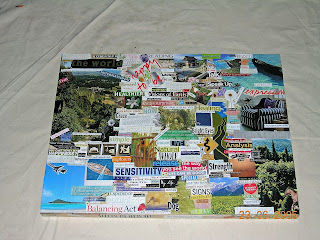 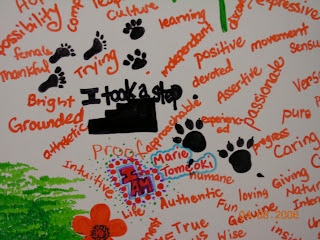 One step, one moment at a time, anything is possible.  So as those of you know me with promises, I never ever break promises; I definitely will spread the word and share my life stories to support, teach, and help anyone and everyone who has been touched by the world of mental health.


This is my purpose in life: I've known it deep inside for a long time coming.


Please do vote and share it with as many people as you know, and tell them to spread the word; one step and moment at a time anything is possible.  Let awareness of mental health reach the world. 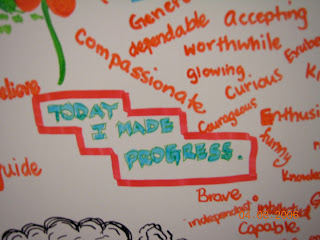 Thank you so very much for your time, I can not thank you enough, truly, I am touched.


I am totally approachable so feel free to contact me any time, anywhere, anyhow about any~thing. 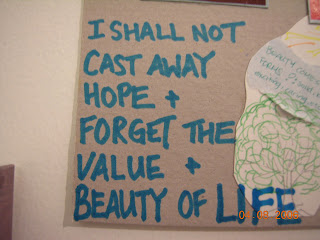 This was my motto that stuck with me through the struggles and even now.

Posted by BeingMarieT at 1:37 AM No comments:

Good evening.  I think I have many things on my mind; this is why I am still painting and up at 12:15 am (usually it is later but tonight I actually planned to go to sleep earlier).


Here is the newest piece I did recently

Move Through Space
Acrylic paint on braced birch wood
24in x 48in x 1.2in
http://www.marietomeoki.com
Please go to my website to see updates:)
The other day I surprised myself as I was brushing my teeth... I was not only brushing my teeth but trying to pluck my stray eye brow hairs, kick the ball for Clover (Cairn Terrier), and talk all at the same time.  I know I am a multitask-er but catching myself in the reflection I thought 'that's a bit messed up!'  I had to laugh.
As I am painting I try not to get distracted (I don't like to be disturbed when I am painting), but once I start waiting for the paint to dry, oh gosh, then I am off doing the laundry, kicking the ball for Clover, reading, typing, drawing, sewing, and who knows what else.  Yes it's an illness and I'm seeking help, LOL!!!
I hate the cold, I resent the weather here, it does no good for anyone/dog/thing.  I need to move; and I know I have been saying that for a long time now but this is becoming more of a serious matter as this environment is no good for creative development, furthering my career, inspiration, peace, calm, quiet, well being and healthy life style.  So where to?  The biggest challenge; the west coast for sure as I need to be next to the ocean, but then in Canada as I am not a US citizen, nor do I have any company backing me up, and I am not a student... but above the Canada/US border it's cold so I am f***ed.
Relationship issues; YES.  I wont go into that right now.
'Stay in the moment, M', breathe, what do I need, to sleep as my sleepy meds are kicking in.
Okay, so good night.  I have some good news to post later on too:)
Posted by BeingMarieT at 12:41 AM 1 comment: